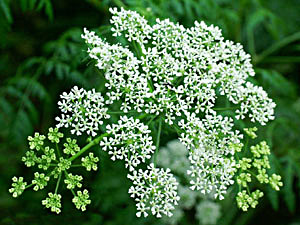 Medicinal use of Hemlock:

Hemlock is a very poisonous plant that has a long history of medicinal use, though it is very rarely used in modern herbalism. It is a narcotic plant that sedates and relieves pain. The plant contains coniine, an extremely toxic substance that can also cause congenital defects. The whole plant is analgesic, antispasmodic, emetic, galactofuge and sedative. It is a traditional folk treatment for cancer and was formerly widely used internally in very small doses to treat a variety of complaints including tumours, epilepsy, whooping cough, rabies and as an antidote to strychnine poisoning. It is still used externally, usually in ointments and oils, in the treatment of mastitis, malignant tumours (especially breast cancer) anal fissure and haemorrhoids. The leaves and stems should be harvested when the first fruits are forming, since they are then at their most active medicinally. The fruits are gathered either when fully ripe, or before they turn from green to yellow, and are then dried. Because of the extremely toxic nature of this herb, it is seldom employed nowadays. Use with extreme caution and only under the guidance of a qualified practitioner. See also the notes above on toxicity. A homeopathic remedy is prepared from a tincture of the fresh plant, harvested when in flower. It is used for treating complaints such as dizziness, coughs, insomnia, exhaustion, arteriosclerosis and prostate problems.

Leaves - cooked. Although toxic, plants found in the south of England are comparatively harmless and the leaves are used as a pot-herb. They can also be dried for later use. The toxic principle is said to be destroyed by thorough cooking or drying. Caution is advised, especially on the remarks about plants in southern England. See the notes above on toxicity.

Propagation of the herb:

Seed - best sown in situ as soon as it is ripe in the late summer. It usually germinates in the autumn.

A very poisonous plant, the toxins are especially concentrated in the seed. The stems contain up to 0.06% of the toxic alkaloids, the leaves between 0.03 and 0.8%, the flowers from 0.09 to 0.24% and the green fruit from 0.73 to 0.98%. The toxins, however, are very volatile and decompose readily, especially when the plant is dried or cooked. The toxins paralyse the respiratory nerves, causing death by suffocation. Children have been known to die after using the hollow stems as blowpipes. The poisonous nature of the plant varies considerably, with many people believing that the plant is less toxic when grown in cooler climates.