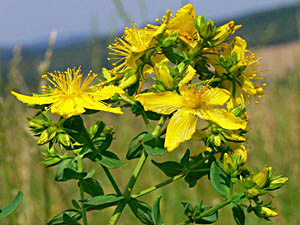 Medicinal use of St. John's Wort:

St. John's wort has a long history of herbal use. It fell out of favour in the nineteenth century but recent research has brought it back to prominence as an extremely valuable remedy for nervous problems. In clinical trials about 67% of patients with mild to moderate depression improved when taking this plant. The flowers and leaves are analgesic, antiseptic, antispasmodic, aromatic, astringent, cholagogue, digestive, diuretic, expectorant, nervine, resolvent, sedative, stimulant, vermifuge and vulnerary. The herb is used in treating a wide range of disorders, including pulmonary complaints, bladder problems, diarrhoea and nervous depression. It is also very effectual in treating overnight incontinence of urine in children. Externally, it is used in poultices to dispel herd tumours, caked breasts, bruising etc. The flowering shoots are harvested in early summer and dried for later use. Use the plant with caution and do not prescribe it for patients with chronic depression. The plant was used to procure an abortion by some native North Americans, so it is best not used by pregnant women. See also the notes above on toxicity. A tea or tincture of the fresh flowers is a popular treatment for external ulcers, burns, wounds (especially those with severed nerve tissue), sores, bruises, cramps etc. An infusion of the flowers in olive oil is applied externally to wounds, sores, ulcers, swellings, rheumatism etc. It is also valued in the treatment of sunburn and as a cosmetic preparation to the skin. The plant contains many biologically active compounds including rutin, pectin, choline, sitosterol, hypericin and pseudohypericin. These last two compounds have been shown to have potent anti-retroviral activity without serious side effects and they are being researched in the treatment of AIDS. A homeopathic remedy is made from the fresh whole flowering plant. It is used in the treatment of injuries, bites, stings etc and is said to be the first remedy to consider when nerve-rich areas such as the spine, eyes, fingers etc are injured.

The herb and the fruit are sometimes used as a tea substitute. The flowers can be used in making mead.

Seed - sow in a greenhouse as soon as it is ripe in the autumn or in the spring. It normally germinates in 1 - 3 months at 10°C. Prick out the seedlings into individual pots when they are large enough to handle and plant them out into their permanent positions in the summer. Division in spring or autumn. Very easy, larger clumps can be replanted direct into their permanent positions, though it is best to pot up smaller clumps and grow them on in a cold frame until they are rooting well. Plant them out in the spring.

Skin contact with the sap, or ingestion of the plant, can cause photosensitivity in some people.